Follow Us
Search our site...
Home / Recipes / Peach Crisp in a Jar

Peach Crisp in a Jar

Well summer is officially upon us. And that means, among other gloriously summery things–fresh fruit is abundant. 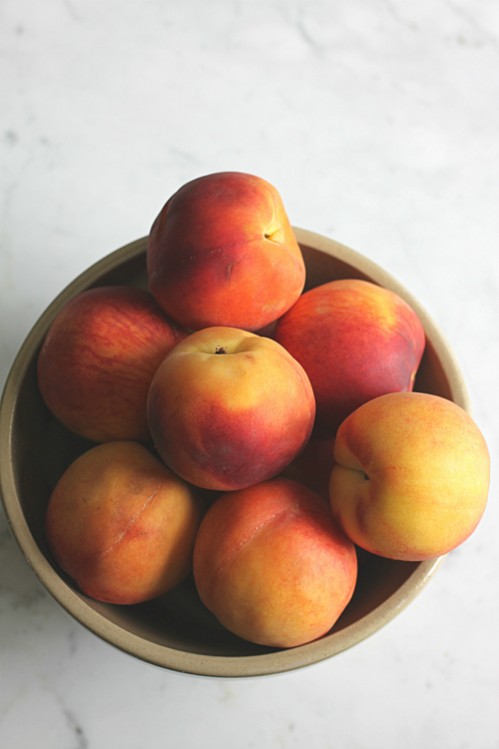 When I saw those gorgeous peaches at my local farmer’s market the other day, I knew I had to bake something with them. And since peach crisp just happens to be a favorite in our house, my mind was quickly made up–peach crisp it most definitely was. How can you go wrong with juicy peaches and a crumbly, buttery topping? I wanted to try something a little bit different this time around though–baking the crisp in jars. I think things look (and taste!) better when they’re individually portioned out, don’t you? How cute is this crisp in a jar? 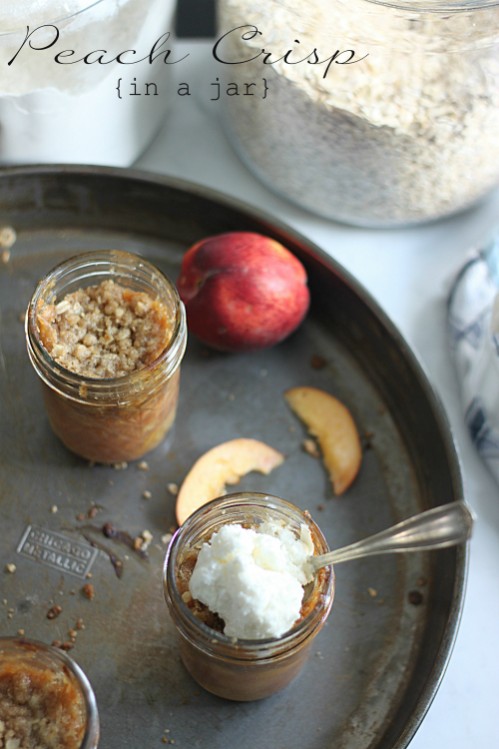 It would definitely be the perfect ending to a cookout, in my humble opinion 🙂 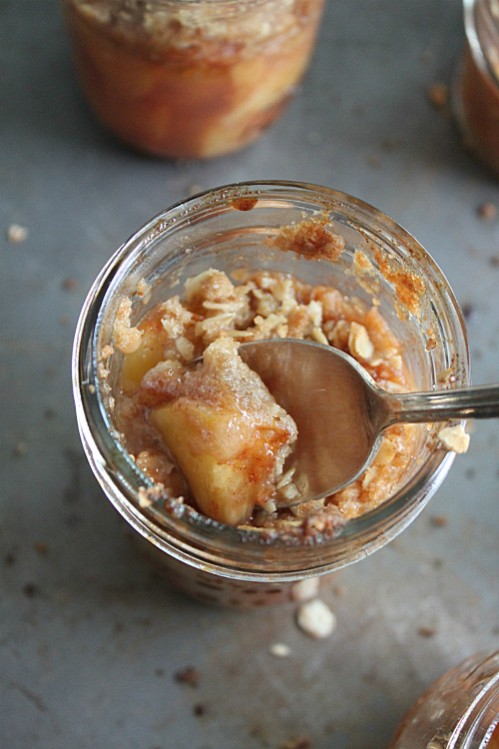 I searched the internet for a recipe but soon became slightly overwhelmed with the amount of choices there were. Everyone does crisp differently! But honestly, this is one of those recipes that you can’t mess up, no matter which version you choose. So this particular recipe is a combination of several I found. I made three different batches and decided that the 2nd batch was my favorite. I’ll tell ya why in a sec. 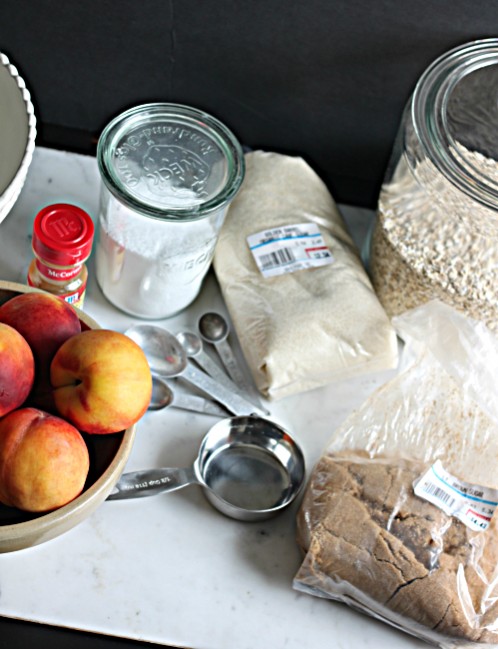 I started off by blanching the peaches. You submerge them in boiling water for 30 seconds, then they take a plunge into an ice bath. This just causes the skin to peel right off, making your job that much easier. (Choose peaches that are on the firmer side but have a little give to them…you don’t want super hard peaches otherwise the skin will be very difficult to peel off.) After the peaches are cut into smaller pieces, add about a tablespoon of lemon juice and just a bit of sugar to them. I used Golden Barrel Organic Cane Sugar for this recipe. Organic Cane sugar has a larger crystal size than white refined sugar but is slightly smaller than raw sugar. Its off-white appearance is a result of being less refined due to it still containing some molasses content. Also, being organic, you can be sure that it is produced without any synthetic pesticides and herbicides. Basically, I was itchin’ to try this sugar, but you may certainly use whatever granulated sugar you have on hand. 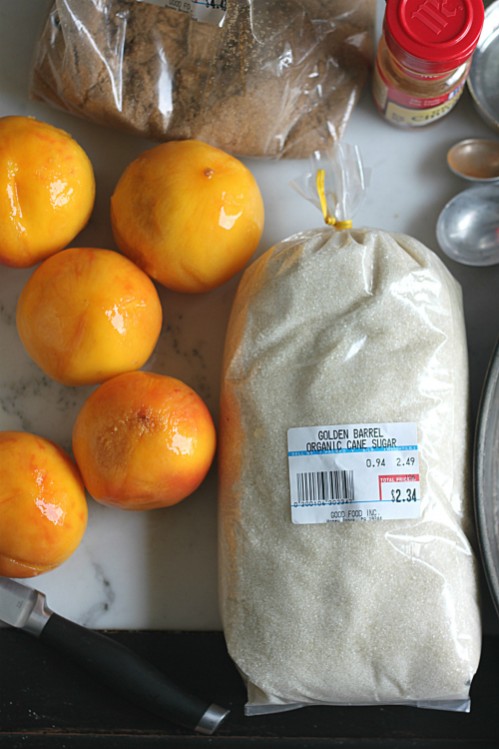 The first recipe I tried didn’t have any cinnamon in with the peach filling (the cinnamon was instead in the topping), but the second recipe did. Take my advice–add the cinnamon to the peaches. It gives it a wonderful flavor. You also want to add a couple tablespoonfuls of flour to thicken up the juices that will come out of the peaches when baking. After you add these ingredients and mix everything together, let the peaches rest for about 5 minutes so that the juice and sugar have a chance to do their thing (get syrupy). 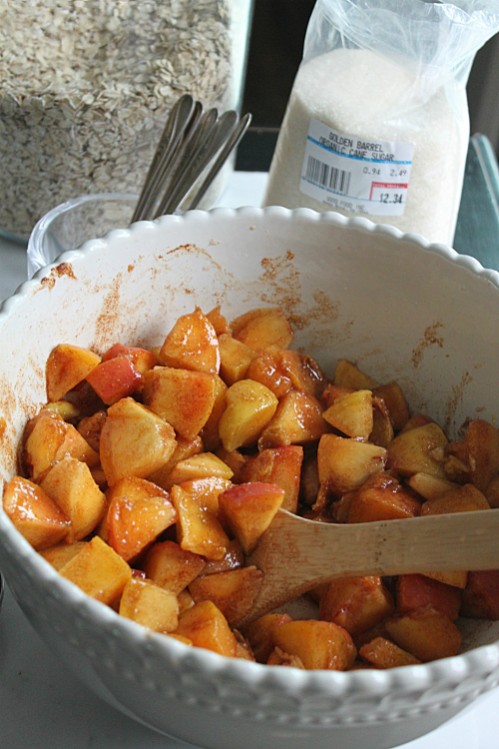 The crumb topping is delightful–a stick of butter, Golden Barrel brown sugar, some more organic cane sugar, a little bit of flour and salt, and some good old fashioned oatmeal, makes this topping a keeper. I found that this recipe makes a lot of topping, so if you have some leftover, you can always refrigerate it and use it up later on another batch of crisp. 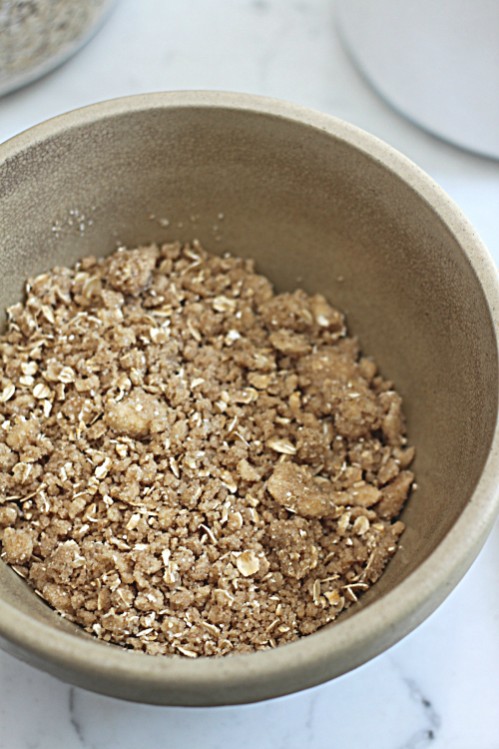 You can certainly make this crisp in a pan if you don’t have any jars. I ended up using an assortment of jar sizes which worked out perfectly for my little family (my 2 year old loved having a jar his size). 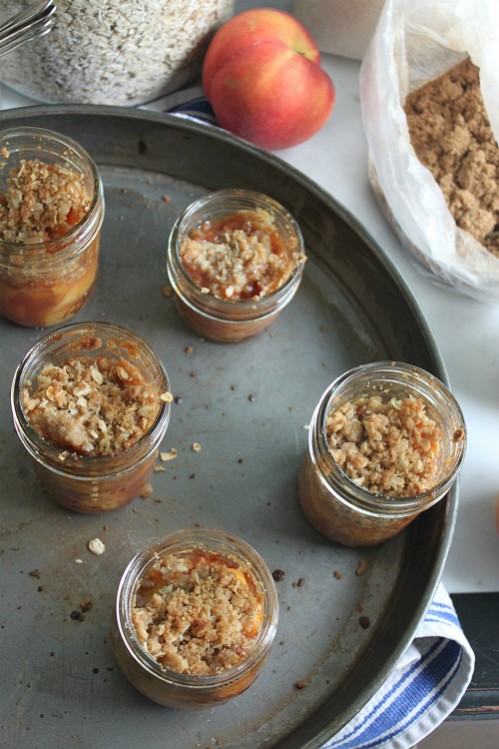 And of course, a scoop of vanilla ice cream on top is always a great idea.

So before peach season is done, you’ve gotta try some fresh peach crisp…in a jar! 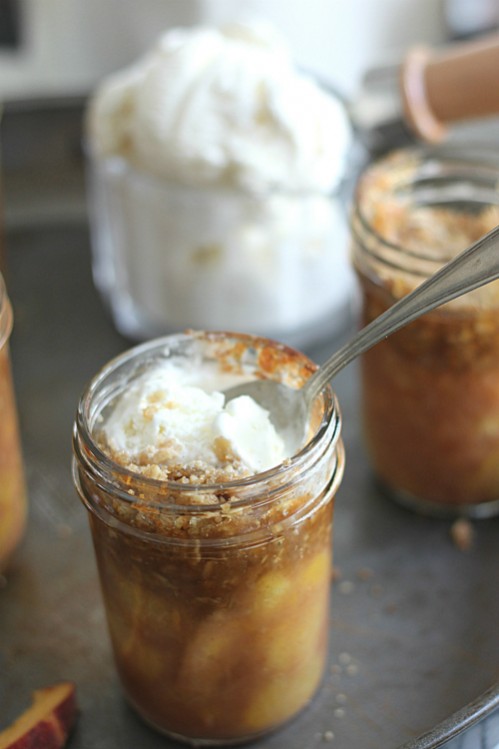 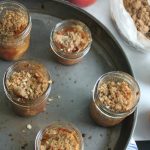