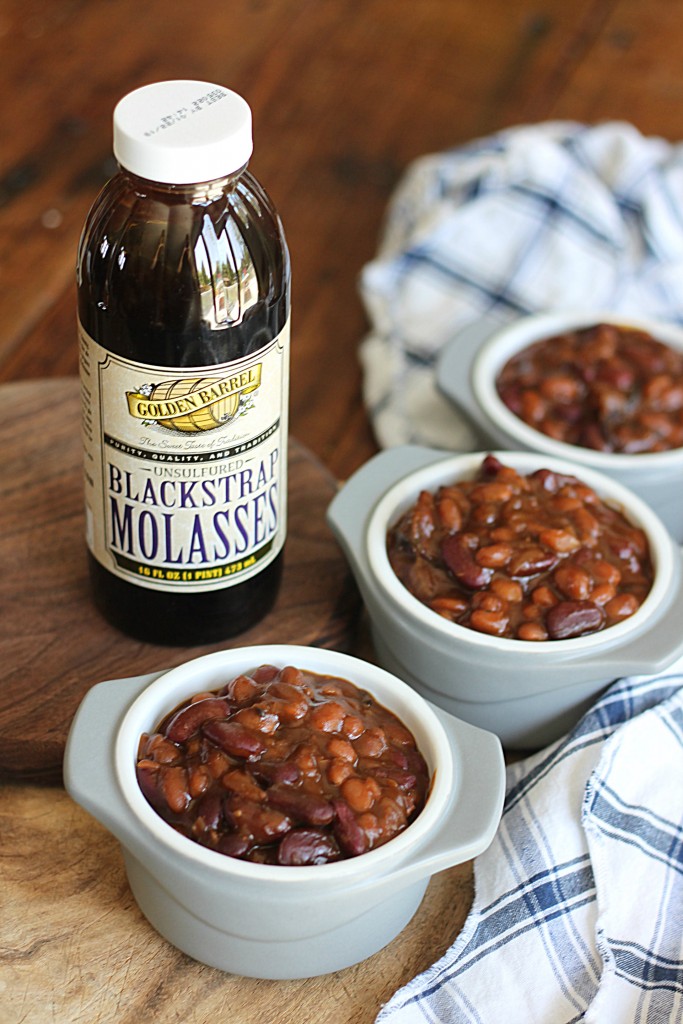 Baked beans. Ahh…those two words conjure up some good memories on my end–summertime barbecues, grilling up some juicy burgers, some good ol’ Oscar Mayers, maybe even some grilled corn on the cob. And what’s the perfect side with all that char-broiled goodness? Baked beans, of course. 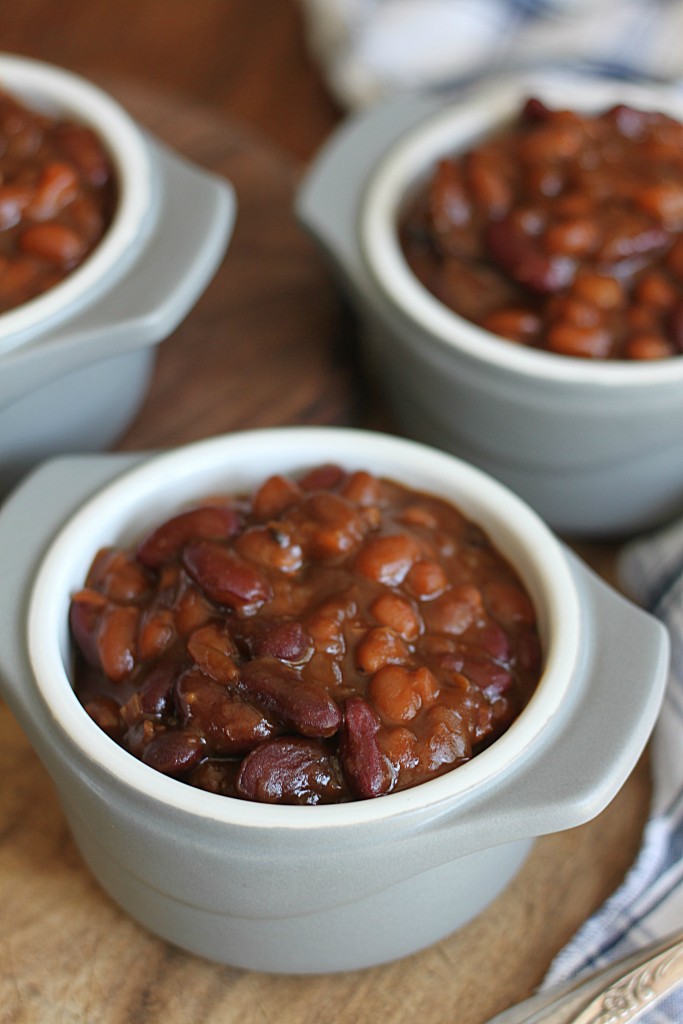 Growing up, we had baked beans a plenty. With six kids and one income, Mom had to be creative (i.e. cheap) with dinners so she’d crack open a can of Pork and Beans, chop up some of those Oscar Mayers, throw ’em in, and call it a day. Or, in this case, dinner. It wasn’t until I was an adult that I tried some “doctored-up” baked beans. And now those days of opening a can, heating up, and chowing down are over. Thankfully. 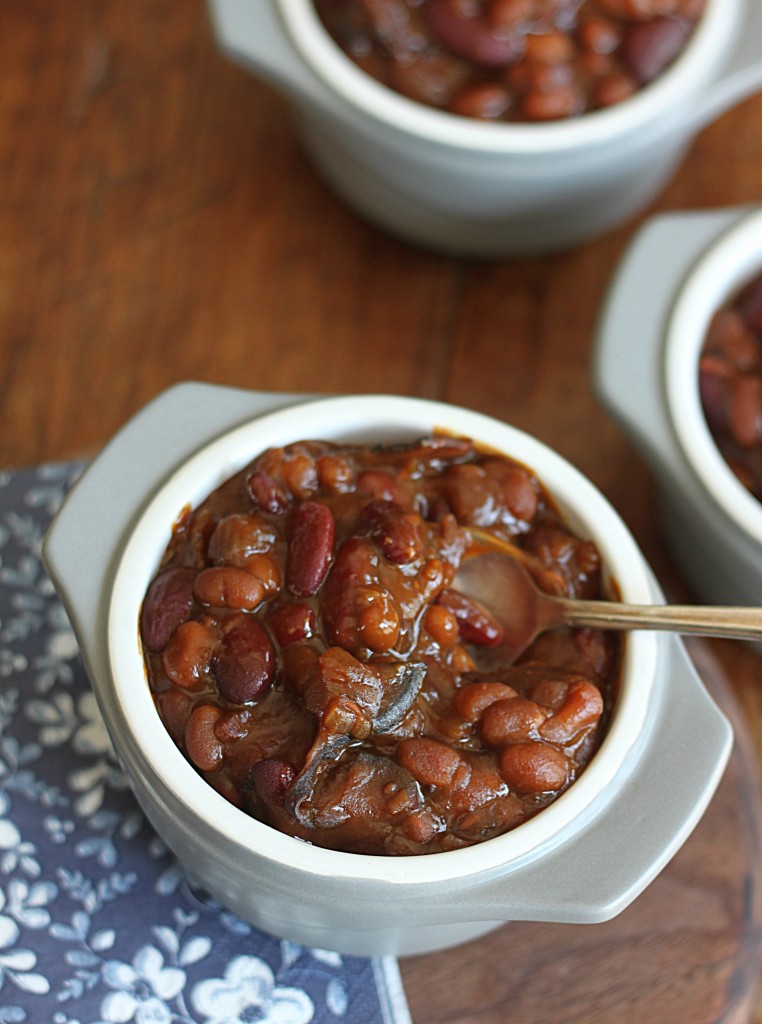 As a matter of fact, the first time I tried baked beans that were more than “right out of the can” was at a church cookout. There was a crock pot full of beans that had all sorts of stuff added to it. I scooped some on my plate and the rest, they say, is history. I loved them so much, I asked the lady who made them, for the recipe. I actually asked her a couple times. I guess the recipe was too good to share! Never heard back from her. Of course that just made me even more determined to find a recipe that was as good or even better than that recipe-hoarder lady’s. (I’m not bitter…not at all. 😉 )

First you start where all good recipes start–with bacon. Fry up that goodness, cool on a paper towel-lined plate, and cut into bite-size pieces. 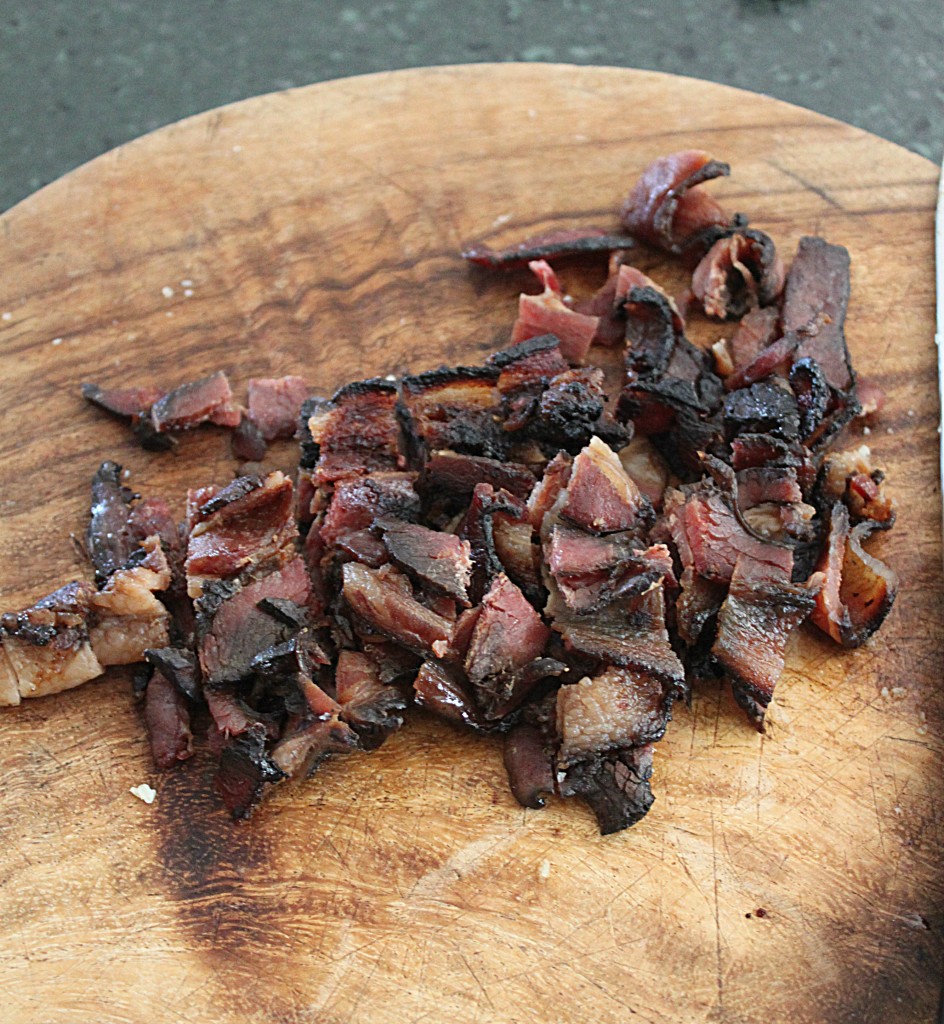 Next, you want to leave some of that bacon grease right where it’s at and sautee a diced onion in it. When the onion is done, mince in three cloves of garlic. Because, seriously, everything is better with garlic. 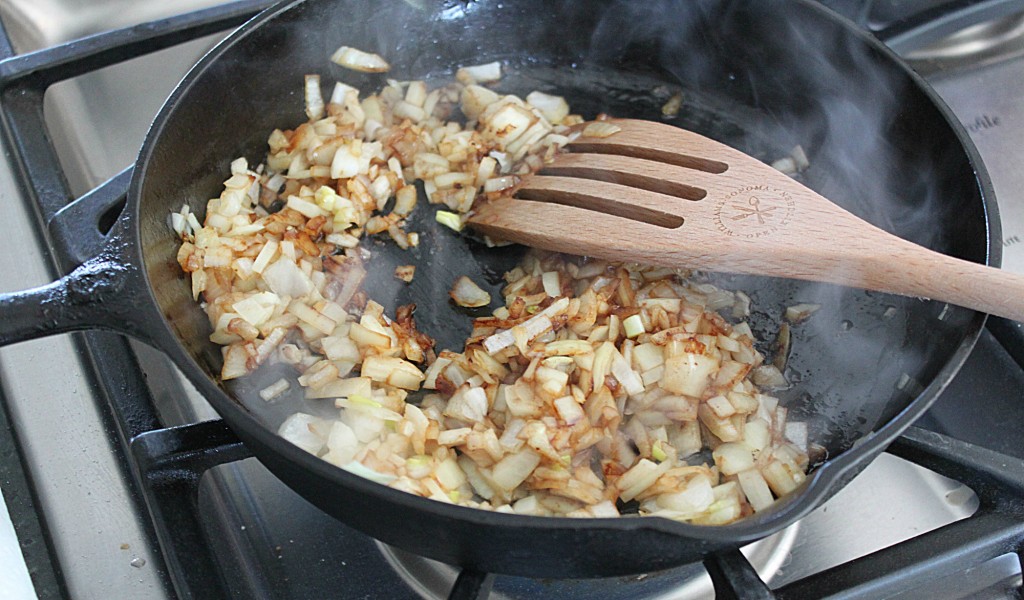 The next few steps are messy with dumping this and that in, so I have no pictures for you. My splatter-free camera thanks you. But basically you add Golden Barrel brown sugar, Golden Barrel Blackstrap Molasses, apple cider vinegar, ketchup, and beans in here, along with the bacon you already cooked. The blackstrap molasses I added really enhances the flavor and gives the beans a beautiful dark color. And the brown sugar gives the beans just enough sweetness. It’s a glorious combination. There are kidney beans in this recipe. They just make this dish even heartier in my opinion. You may certainly omit them if you’re not a fan. (I only added one can of baked beans in the skillet ’cause I ran out of room, but then added the other beans to the stoneware pan I cooked everything in. So if you have a large skillet, use it!)

This is what it looks like straight out of the oven. You can’t tell in the picture, but this stuff was bubblin’ like crazy and I had a random crazy thought of being tortured by having this scalding pan of beans poured on me. That would really hurt. So…in other words–be careful when taking this out of the oven! 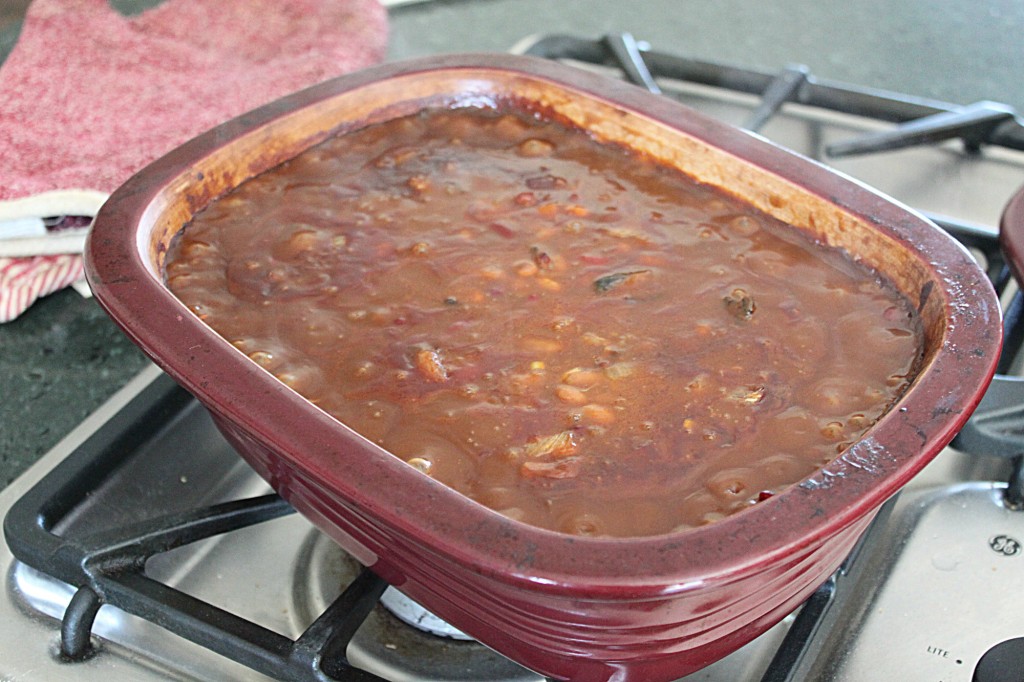 So, molasses baked beans. What memories do you associate with this backyard BBQ staple? One thing’s for sure–we want to share this recipe with everyone so all can enjoy this wonderfully hearty sidekick. You won’t see any recipe hoardin’ going on here! 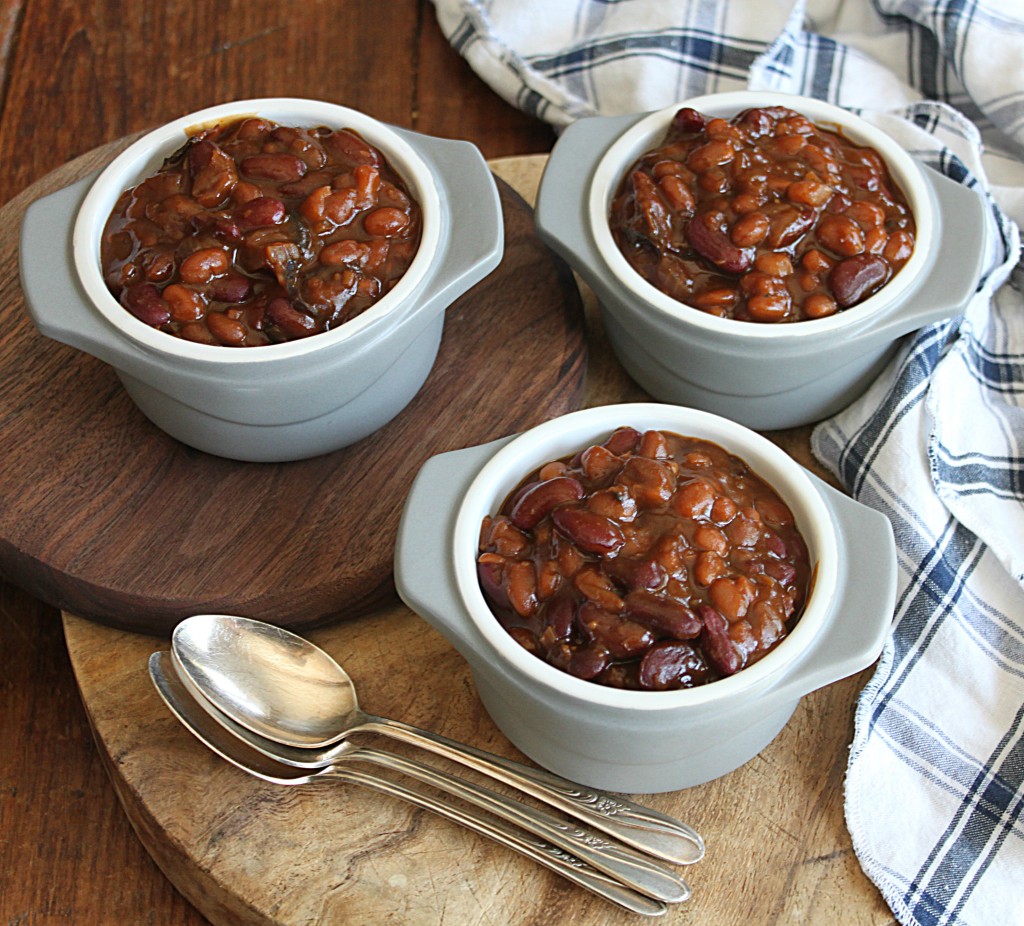 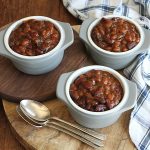 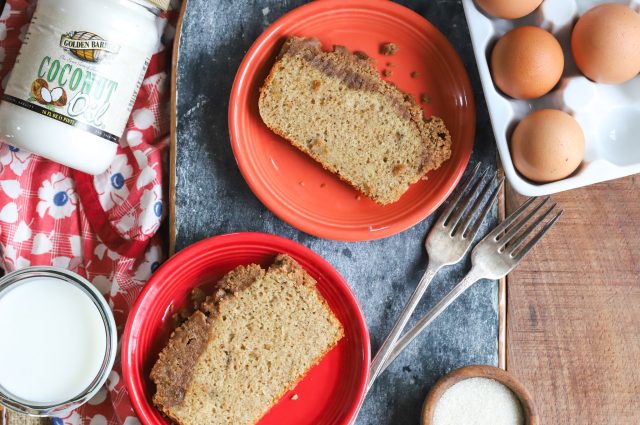 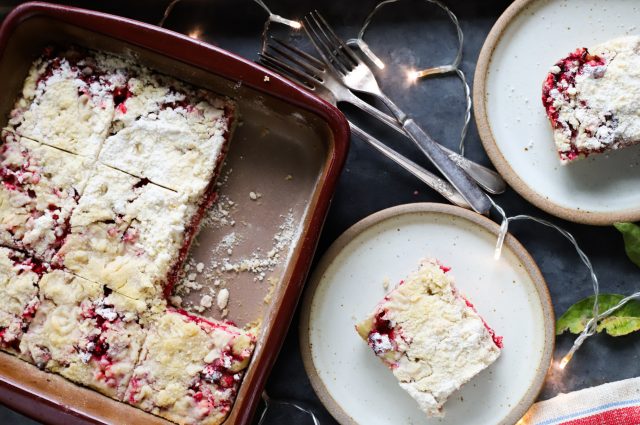