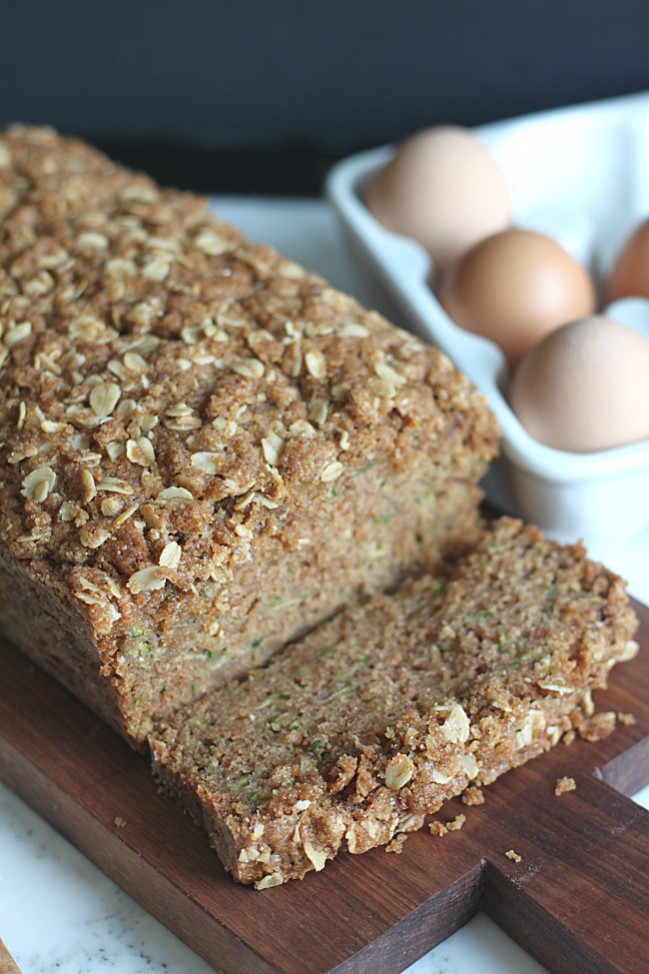 Where I live (in Lancaster County, PA), nearly everyone has a garden in their backyard. It’s just something that you do. I remember when my husband and I first moved into our wee little rancher as newlyweds–there was a huge plot of our yard dedicated to that Lancaster County tradition. And as a native New Jerseyan, I had no idea how much work a garden entailed. It seemed like in no time at all, the weeds in that “garden” were as tall as my husband, which if you know Mitch, that’s pretty dang tall (he’s 6’11”, for those who haven’t had the pleasure). Needless to say, the following year we planted grass seed. 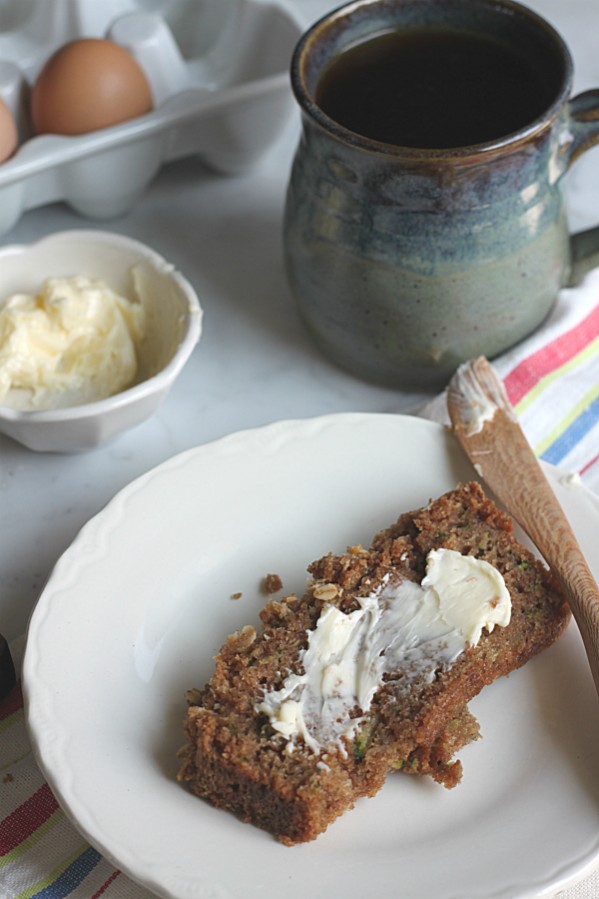 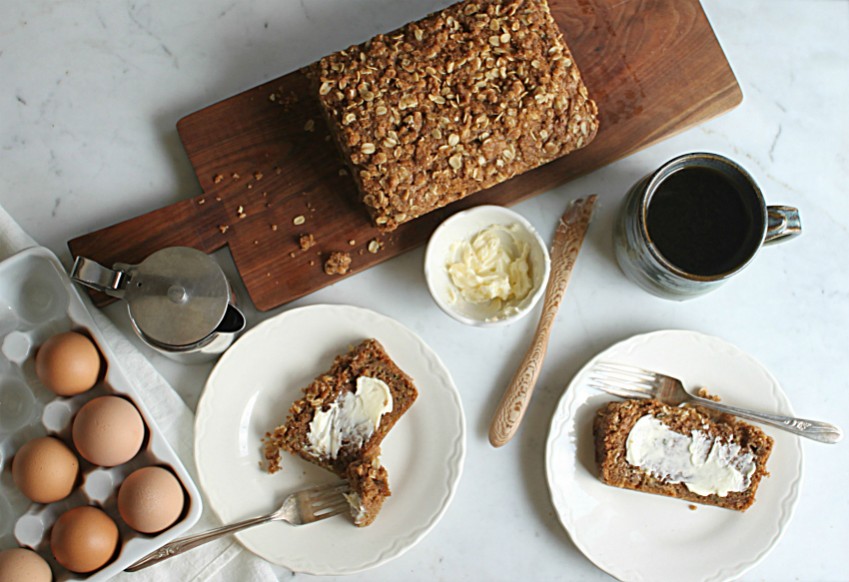 But a few years ago, I thought maybe it was high time to try again. Granted, I knew my limitations (and hate for weeding) so Mitch built me one lone raised bed in which to plant a couple tomato plants, zucchini, peppers, and basil. I love basil. Two words: homemade bruschetta. Could eat that stuff every day. I’ve since given up on peppers–they don’t seem to grow bigger than miniature versions. That, or my boys just keep picking them way too early. Yeah, now that I think about it–it’s probably the latter. Tomatoes–see aforementioned bruschetta comment, and really, is there anything better than a sandwich with freshly-sliced tomatoes in it? So those have been the staples in my garden the past few years. And zucchini. It’s like the easiest thing to grow. They grow so quickly! That’s my kind of gardening–when you can see almost immediate fruit from your labor. 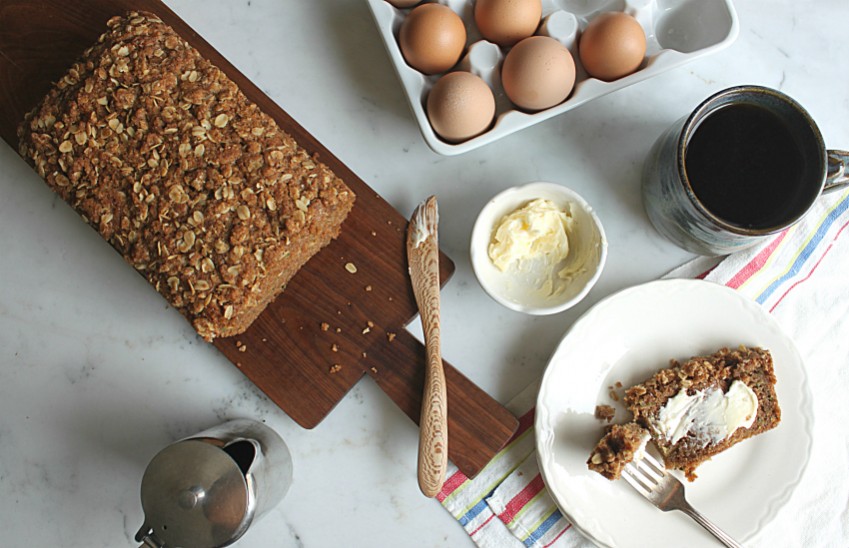 One recipe I’ve made each year we’ve grown zucchini is zucchini bread. It’s an easy recipe and even though there’s a little more sugar in it than I usually like to use (2 cups combined brown and white), I feel like at least my boys are getting some “green” in them since there’s 2 shredded-up zucchinis in it. That counts for something, right? 😉 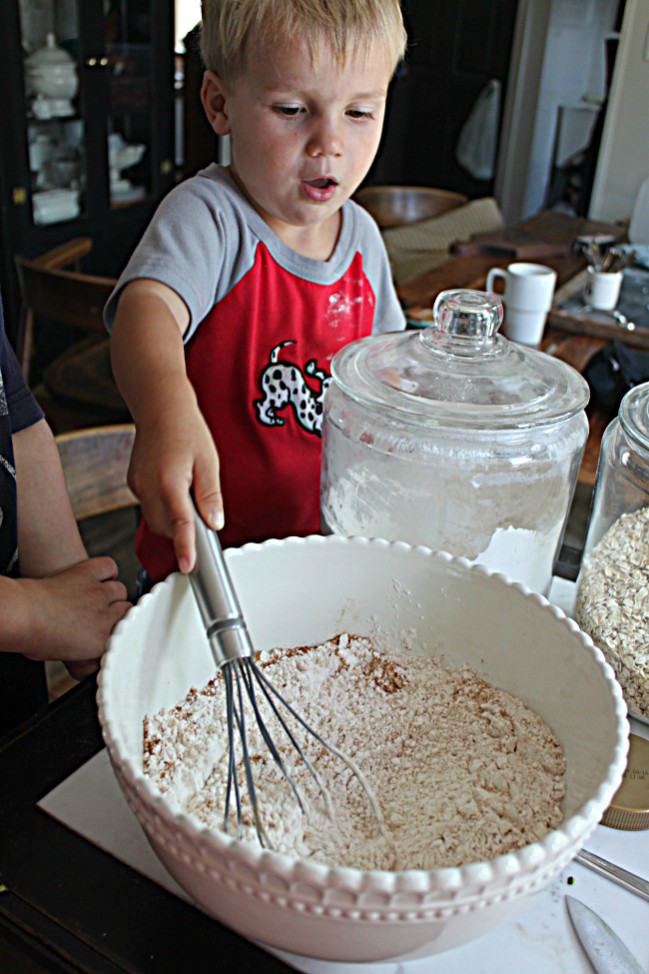 And as with many of my recipes, this is one that my boys love to help me with. I like to encourage their helping me in the kitchen as much as possible (their future wives will thank me someday). Mixing the dry ingredients and the crumb topping together are easy tasks for them to follow. 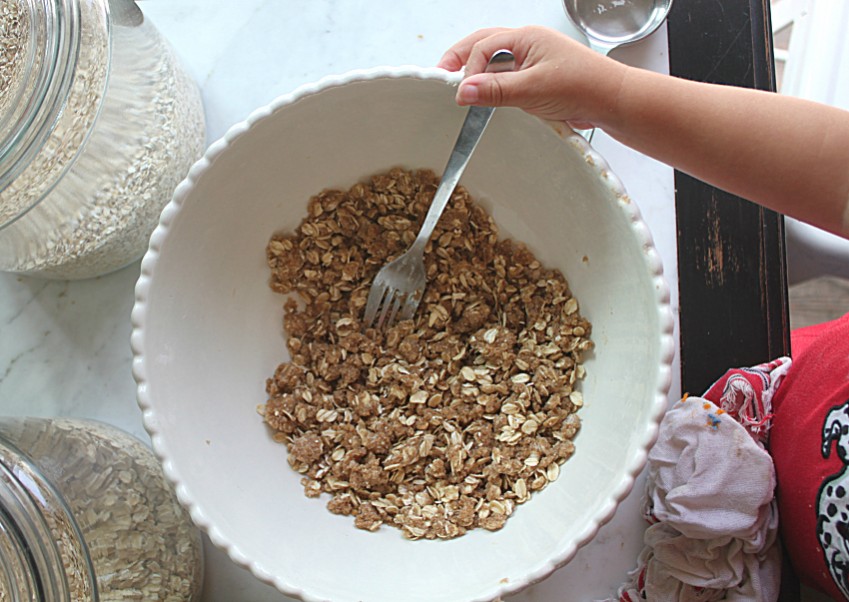 And yes, I realize this is the third recipe in a row that I’ve written that has some sort of crumb topping on it (Blueberry Crumb Cake & Peach Crisp in a Jar). Sorry/not sorry. Hope you don’t mind but crumb topping is one of my favorite things ever. It’s irresistible in my book. One thing to note though with this crumb topping: add it to the top of the batter after the loaves have baked for 15 minutes. This allows the crumbs to stay on top, rather than sink into the batter. 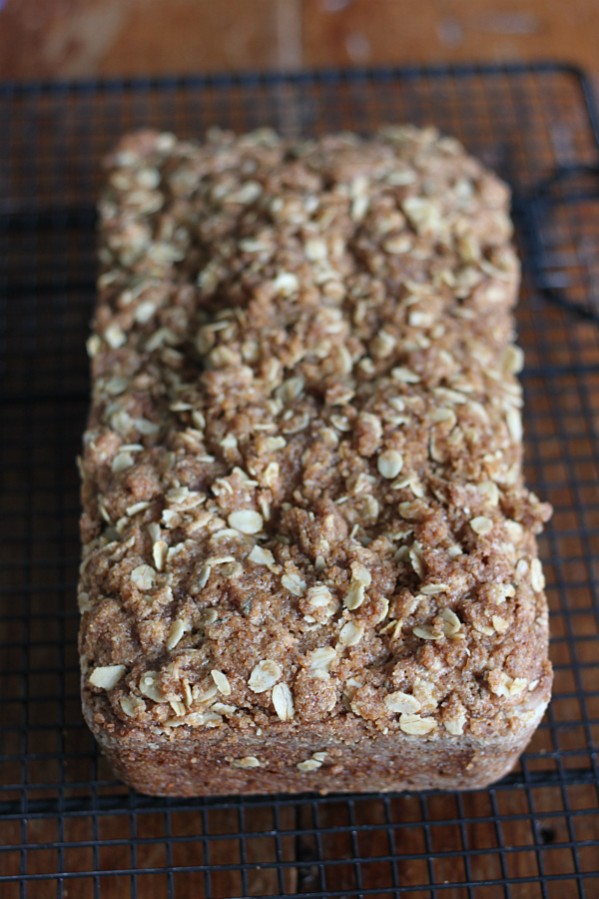 What makes this recipe a bit different from other zucchini bread recipes is the use of coconut oil in it. Coconut oil can be used in exchange for all other types of oil in baking (vegetable/canola). The benefits of coconut oil are vast. You can read more about those benefits here. If you’ve never used it before, I encourage you to! I always melt my coconut oil before adding it to a recipe. But there’s a good chance the oil will already be in liquid form if you use it in the summertime, since its melting point is 76 degrees Fahrenheit. 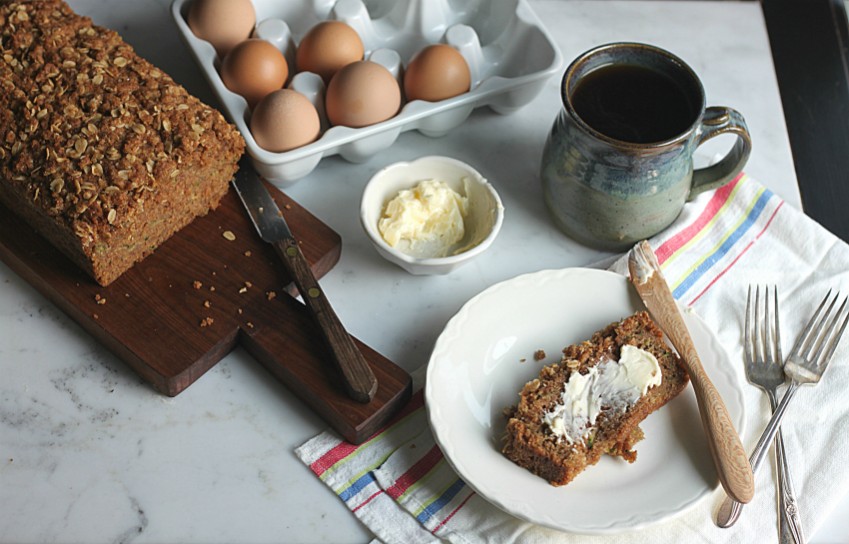 I also used Golden Barrel organic brown sugar and organic cane sugar in this recipe (side note: all sugars are an extra 10% off this month when you enter the code sugar10 online at checkout). 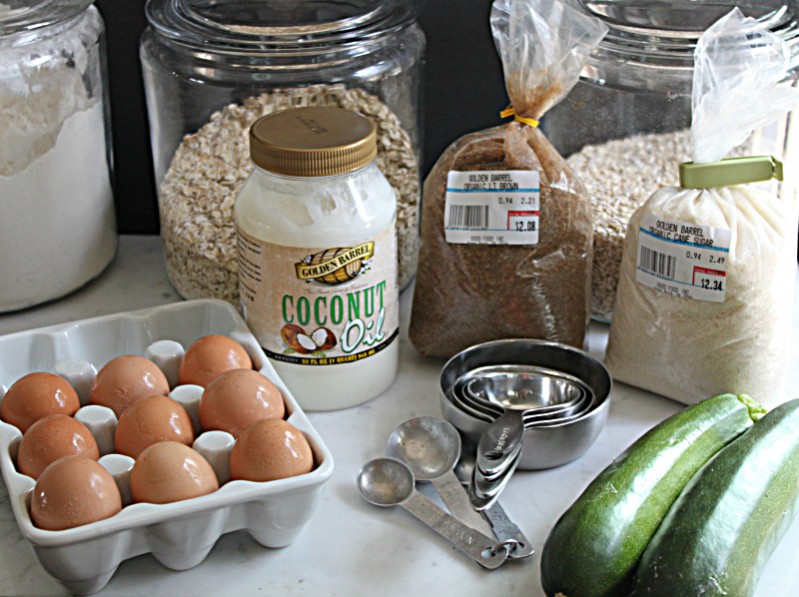 There are a couple things I’ve learned since living in Lancaster County–don’t bite off more than you can chew when it comes to gardening and always save a couple zucchini to make this here bread. Would won’t regret either decision, I promise you. 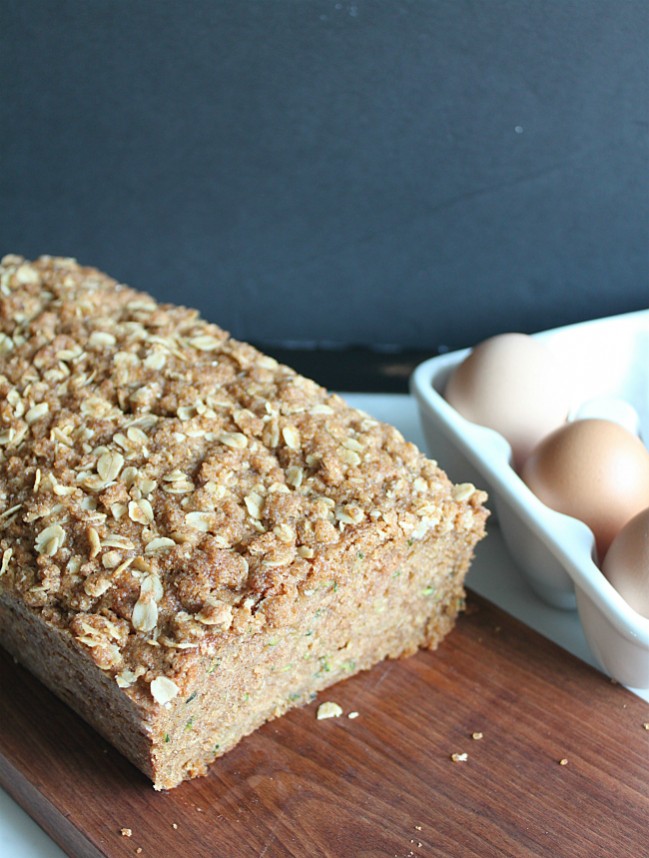 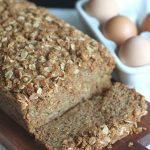