These vegan wild blueberry muffins are full of sweet, juicy flavor and good-for-you ingredients. So feel free to indulge that sweet tooth and do so without the guilt.

Happy new year, everyone! Hope your year has started out well. Ours started out in Florida as we met up with my brother and his family at a resort in Kissimmee. It was amazing. We didn’t do any of the Disney craziness, except for Disney Springs, which was crazy enough. We had a blast lounging by the pool, floating down the lazy river, and spending time with family. And boy, did we eat! I think we ended up only eating out once, but there were lots of treats consumed back at the condo where we were staying. After indulging in not-good-for-you stuff, I was totally ready to start eating better. Enter these muffins.

These are the first vegan baked goods I think I’ve ever made…well these are the first intentional vegan baked goods that I can think of anyway. I was skeptical. I mean, I’ve never substituted an egg with flax meal…nothing that crazy. So I didn’t really know what to expect. Well I can tell you, my friends, I wasn’t disappointed. Nor was my family. 🙂

Sure, the texture is different, but that’s to be expected when you change things up so drastically. This recipe is based loosely on Half Baked Harvest’s Banana Chocolate Chip recipe. I used Paleo Flour as the base, so these muffins are also gluten-free. But you can use whatever flour you want–all-purpose, whole wheat, etc. Sweetened only with maple syrup and the wild blueberries, this muffin recipe is not one that’s loaded with sugar.

While we were in the airport coming home from Florida, I stopped to grab some coffee and spied a row of neatly arranged muffins in the showcase. The blueberry one looked awesome, so that’s what I grabbed to go with my coffee. While it certainly was tasty, I couldn’t help but feel guilty knowing I was eating a bunch of junk. These vegan muffins will leave you satisfied but without the guilt. That’s a win!

Finn wanted a muffin soon after they were on the cooling rack, so I plated one, poured a little maple syrup on top and it was still very warm, so he ended up eating it with a spoon. As the muffins cool, they get more firm; however they’re not going to be like a traditional muffin. They’re much more moist. That could be from the extra wild blueberries I poured in the batter too. 😉

But all in all, I was very happy with how my first ever vegan muffin turned out. You should totally try it for yourself! A sweet treat without the guilt. Now that’s something to celebrate! 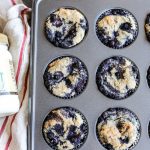