Layers of chocolate and peanut butter on top of a spongey vanilla cake–what could be more scrumptious than that? These tandy cakes are sure to satisfy your sweet tooth in a big way.

Growing up just outside Philadelphia in South Jersey, I ate many Tastykake treats in my day. It was the ’80s and that’s just what you did. Tastykakes were a staple in every Philly suburb household. Now of course they didn’t last long in my house, since there were six of us kids. So it was a miracle if there happened to be a twin-pack of Kandy Kakes (that was Tastykake’s version of a tandy cake) in the bottom of that familiar torn-into cardboard box. As you might know, I’m not a huuuuge fan of chocolate (I mean…it’s delish but I don’t go crazy over it like some people do). My favorite Tastykakes were the Butterscotch Krimpets. Yum. I would always eat the cake part first then save the icing for the end–so SO good. But since Mitch and my boys all love chocolate and peanut butter, I decided to make some homemade Kandy (or in this case,) Tandy Cakes. Fun fact for ya: Golden Barrel sells their molasses to Tastykake for use in some of their products.

The recipe is simple: just bake a vanilla-based cake in a jellyroll pan then layer peanut butter on top of it right after it’s out of the oven. It looks all warm, gooey, and amazing. Then you stick that in the fridge or freezer until the peanut butter firms up. I did the fridge for a bit until my stoneware pan cooled, then I stuck it in the freezer for about ten minutes.

Then, the chocolate part. In order to jazz this familiar recipe up a wee bit, I chose to use two different chocolates: semi-sweet and milk chocolate. The topping is satisfying to make–you simply put one of your chocolates in a bowl over a simmering pot of water (also called a double boiler), and stir in the coconut oil until everything is melted. I always melt my chocolate via the double boiler method. First, because I don’t have a microwave and second, even if I did have one, I don’t trust the mic to melt chocolate correctly. Maybe I don’t trust myself with not walking away from the microwave and thereby scorching my once perfect chocolate. Ha. Either way, double boiler it is for me. You can control it much easier that way, in my opinion.

Why add coconut oil, you ask? So glad you did–it’s so that the chocolate can harden. Coconut oil has a melting point of 76 degrees, which means that it’s in a solid form when it’s cooler than 76 degrees. So when you stick your finished product in the fridge or freezer, the chocolate hardens, making it more like those yummy Kandy Kakes we all love. Ha…just noticed the correlation there–76. Philly. You see it too?? 🙂

I did each chocolate in a different double boiler, pouring and smoothing the semi-sweet over the entire peanut butter layer. Then I took the milk chocolate and poured it in (somewhat) rows. It wasn’t perfect by any means (some of the chocolate was blobby) but that’s the look I prefer–an imperfect rustic look. Then I simply took a toothpick and dragged it through the milk chocolate to make a swirl.

And this is how it hardened. Pretty, right? And homey I’d like to think.

This makes a lot of little squares–I think I got 35 out of one pan. But that’s a good thing. My boys had some for an after school snack as well as shared some with PopPop for dessert that evening.

So, even if you’re not a Philly native like I am, you too can enjoy the taste of Philly in your own home. Homemade is the way to go. 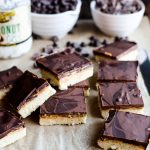 Double Chocolate Peanut Butter Tandy Cakes
Layers of chocolate and peanut butter on top of a spongey vanilla cake--what could be more scrumptious than that?
Ingredients
Servings: bars
Instructions
Share this Recipe