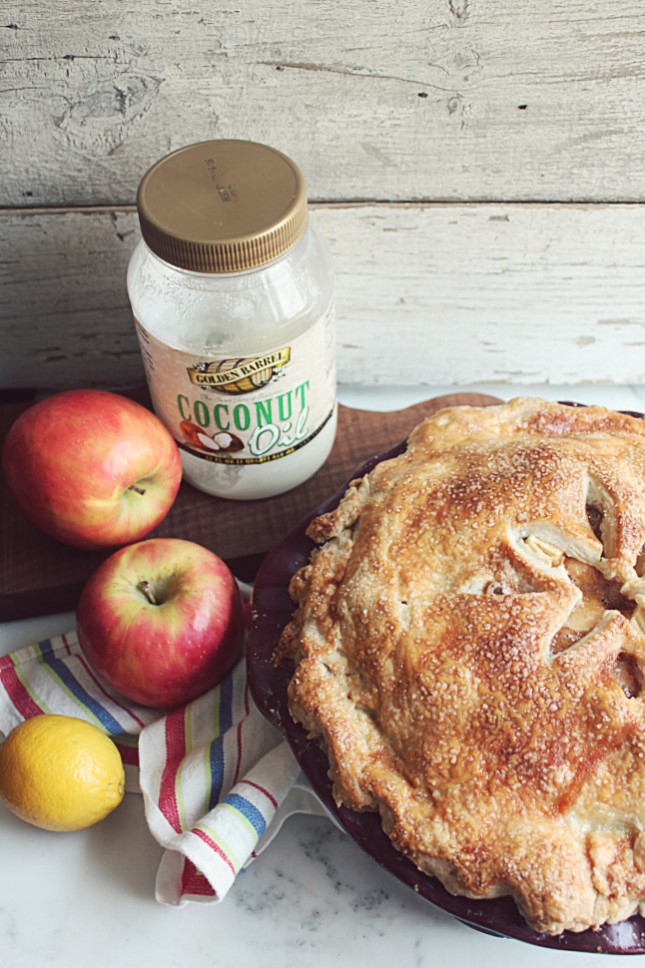 At very outset of this post, let me tell you that I’m in no way a pie-making expert. As a matter of fact, I’ve always steered away from making pies, even though it’s my husband’s favorite dessert in the whole world. There’s something about rolling out a crust that you’ve made from scratch that scared me. What if it falls apart? What if it’s underbaked? What if Mitch hates it? Okay, that last “what if” never crossed my mind because I could serve up the most “questionable-looking” dish and Mitch seriously would eat it and not complain. But you catch my drift–I was NERVOUS when it came to pie-making. So when my friend and I started talking about making a pie together, the concept of making the crust with coconut oil came up in the conversation. I really wanted to try it. I figured people have been making crust with shortening for ages, so why not substitute the shortening with coconut oil? Sure, there are recipes out there that use a combination of different fats–all butter, all shortening, a mix of both butter and shortening, etc. But I wanted to see how an all-coconut oil pie crust would turn out. So I put my fears aside, and rolled up my sleeves.

The ingredients to make a crust are simple: flour, sugar, salt, water, and fat (in this case, coconut oil). 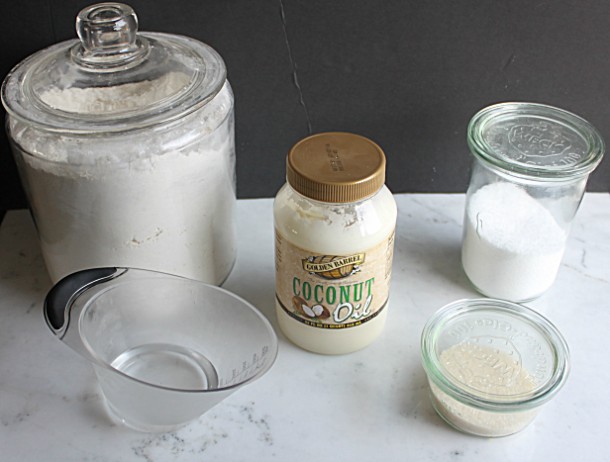 You simply measure out your oil (I put mine in a measure-all type container that pushes out the oil when you’re ready). You want to make sure that your coconut oil is at a soft-solid consistency, at around 70 degrees F, or normal room temperature. If it’s too warm/liquid-y, stick it in the refrigerator for a few minutes to harden up. If it’s too cold/solid, stick it in the microwave to soften it. You want to be able to scoop it out easily. 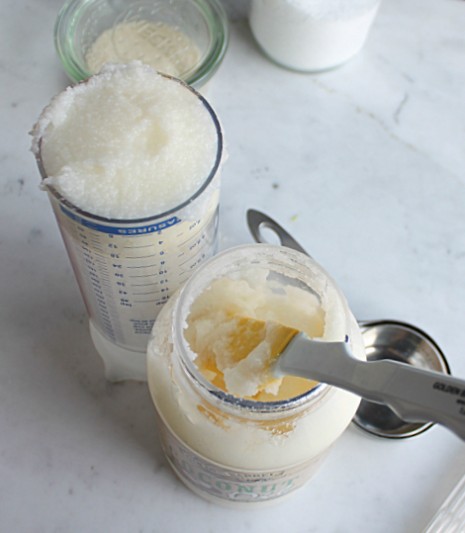 Throw everything (minus the water) in a food processor, pulsing until mixed, then add the water a little bit at a time until your dough comes together and forms a ball. (I stuck my water in the freezer for a few minutes beforehand so it was really cold…you definitely want to use super cold water here.) 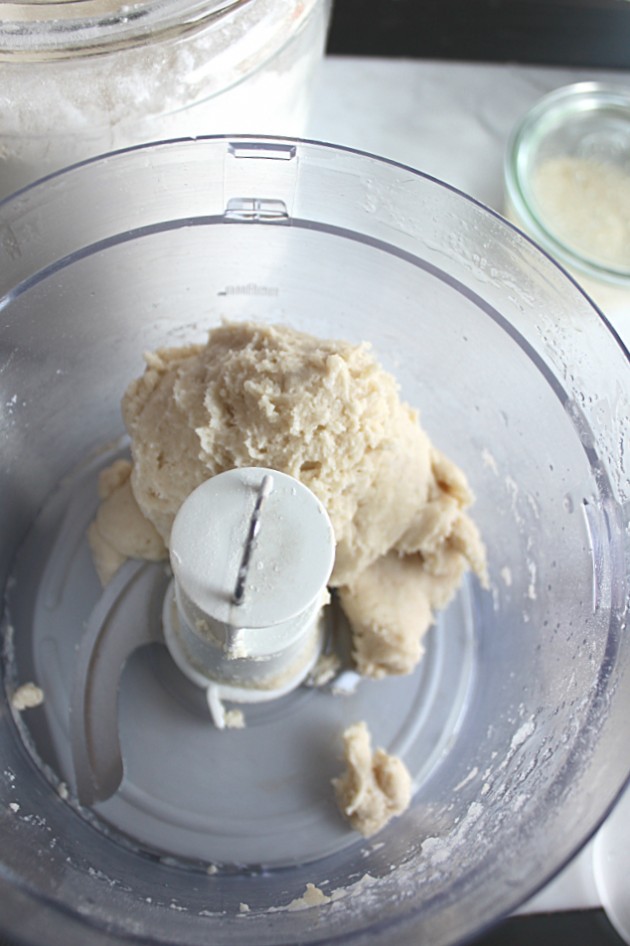 After that, sprinkle flour on your clean work surface (marble is a great choice for crust-making), and shape your dough into a disk. You don’t want to mess with it too much. No kneading! (This was Bryce’s (my 5 yr old) first crust-making experience so he definitely wanted to shape the dough 🙂 I just love those cute little hands!) 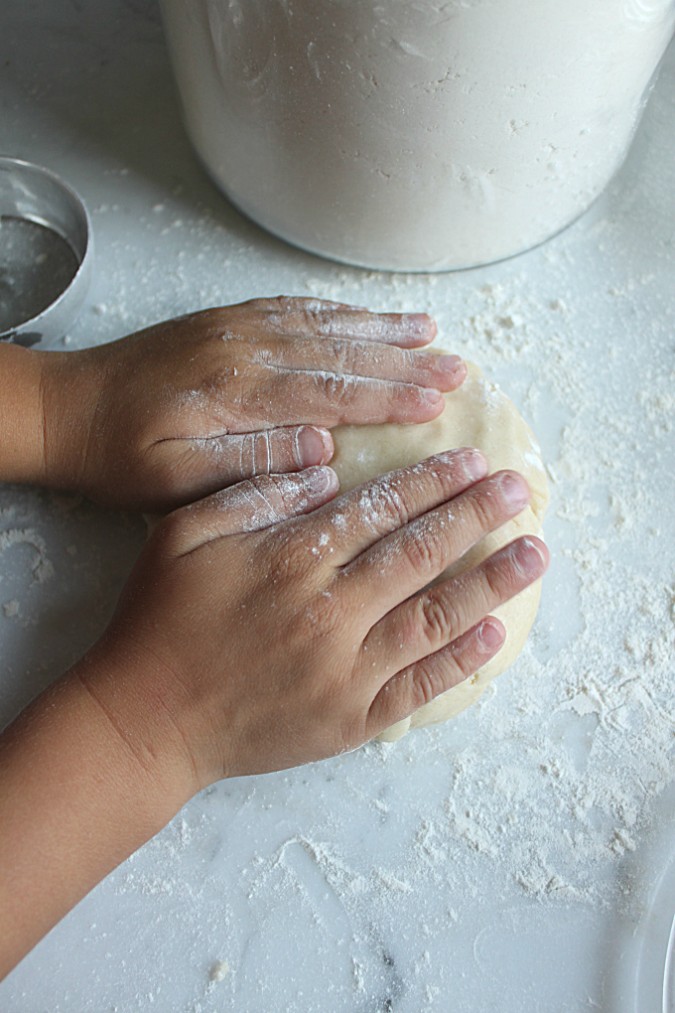 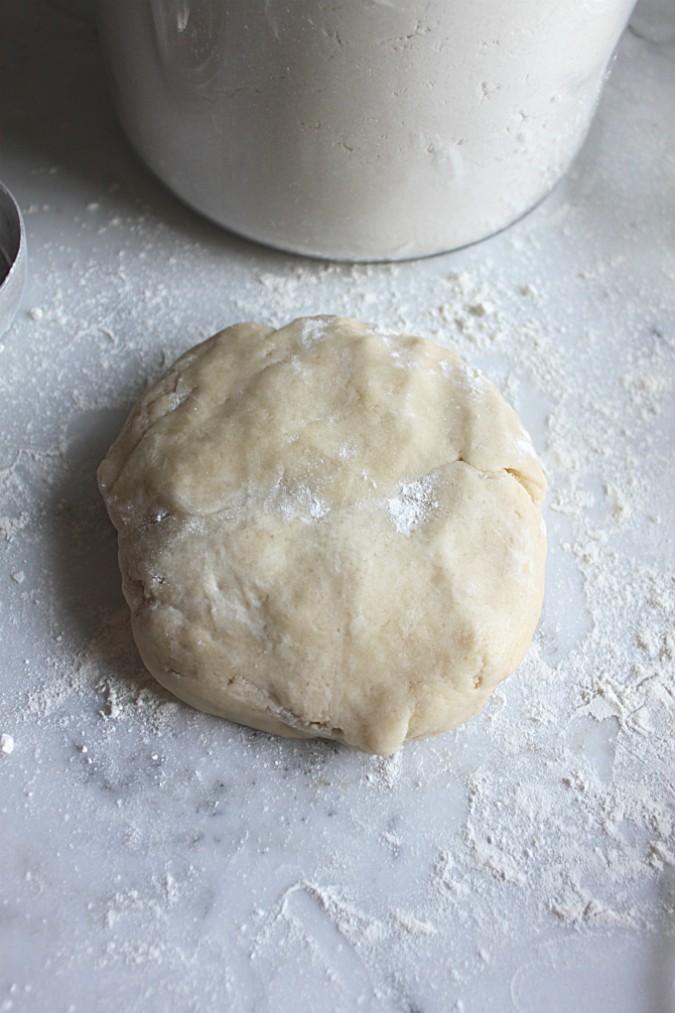 After that, wrap it in plastic wrap and stick in the fridge for 30 min–1 hr. I ended up refrigerating mine overnight, which was fine, but it needed more time to sit out and soften a bit the next day. I made two crusts for the pie I wanted to make. (This recipe is enough for one pie crust, so if you want a double crusted pie, make two portions. I did them separately, just so I knew each crust was exactly the same size.) 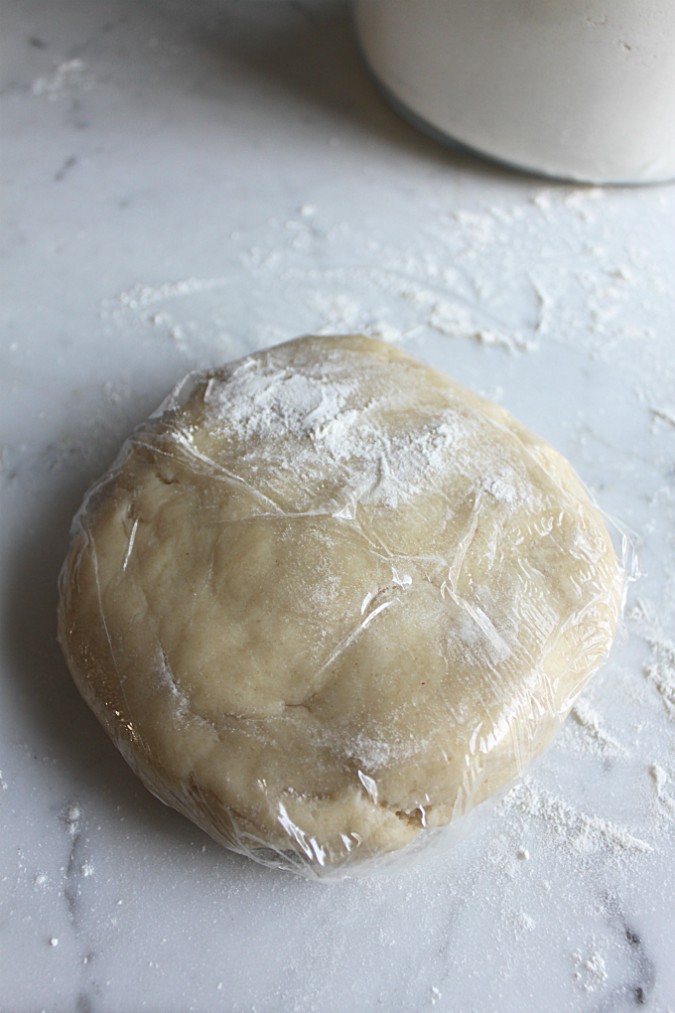 After your dough has chilled, take it back out and let it set for about 15-20 minutes or so on a floured surface. 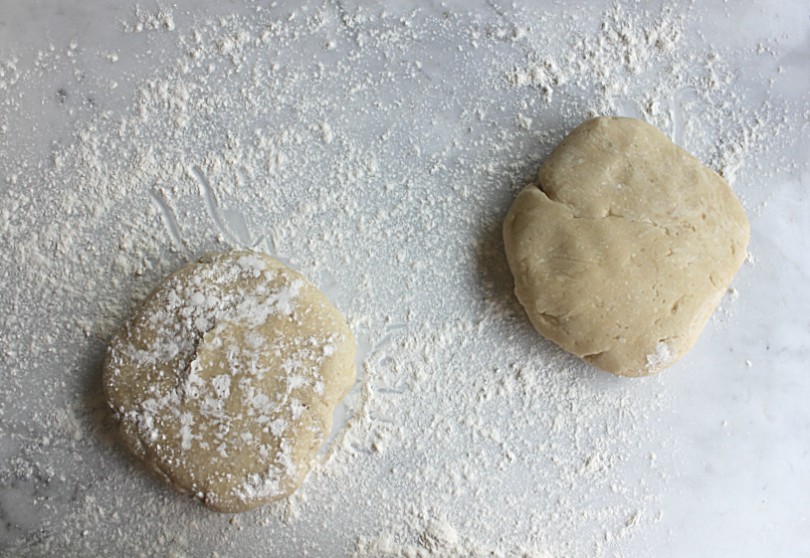 See those little white specks throughout the dough? That’s the hardened coconut oil. Since I had my dough in the refrigerator overnight, I had to work my dough a bit (knead it) to make it pliable enough to roll out. 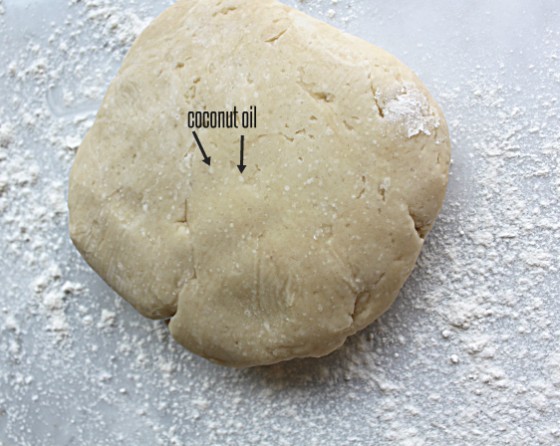 Now it’s time to roll out your dough! Roll out with a rolling pin, picking up and rotating the dough as you go. Make sure you keep sprinkling flour on both your surface and rolling pin. 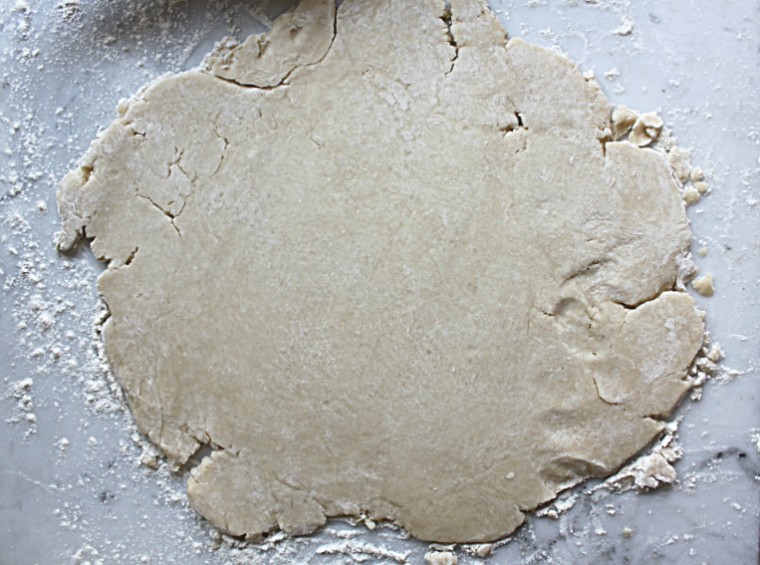 Wrap it around your pin, and roll out over your pie pan, pressing it ever so slightly to the inside of the pan. 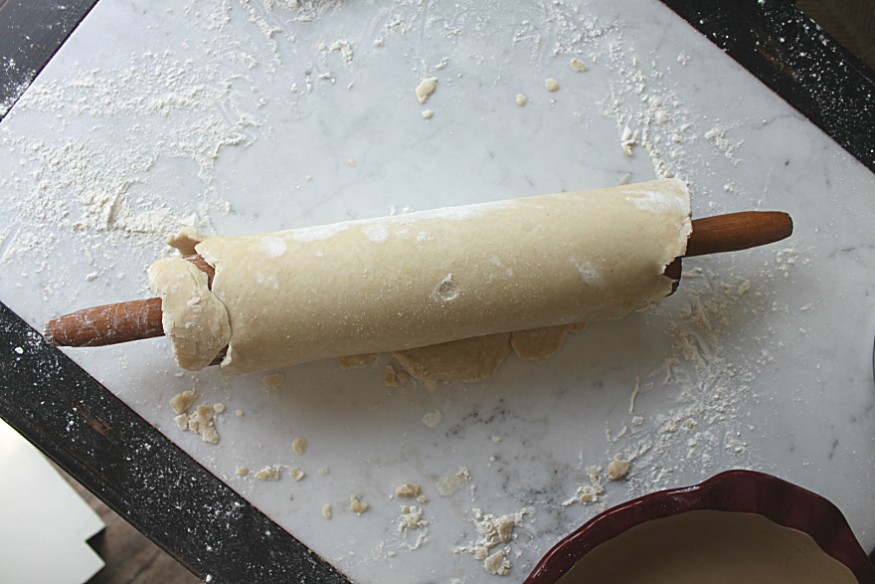 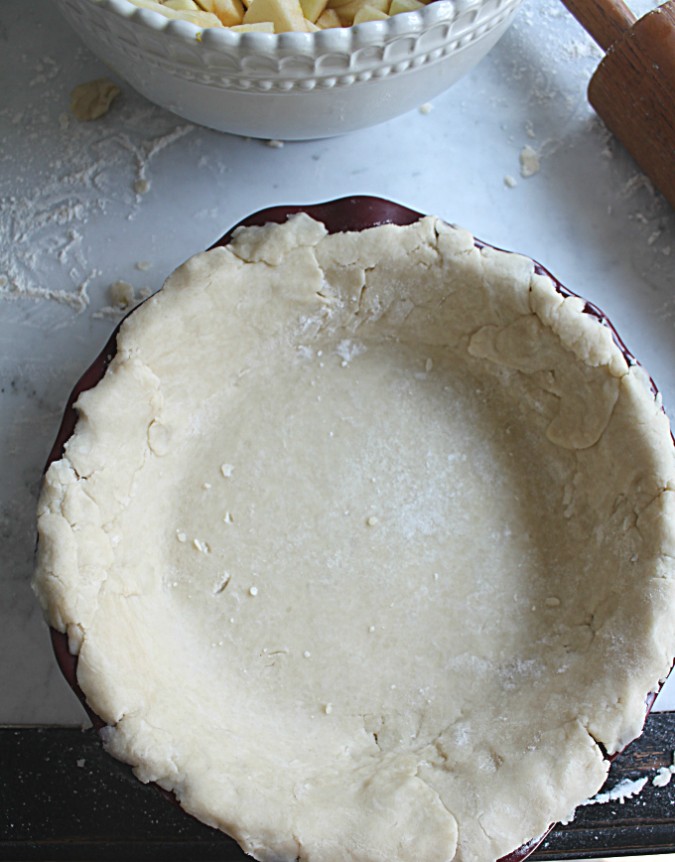 This is the finished product–a fresh double-crusted apple pie with my coconut oil pie crust! I was very pleased and proud of myself when I pulled this out of the oven. As you can see, the crust browned beautifully and was tender and flaky–everything you want in a crust. And it tasted pretty dang awesome as well. Yes, Mitch was very happy with my pie baking experiment that day. Stay tuned for the upcoming recipe for this double crusted apple pie–you won’t want to miss it! 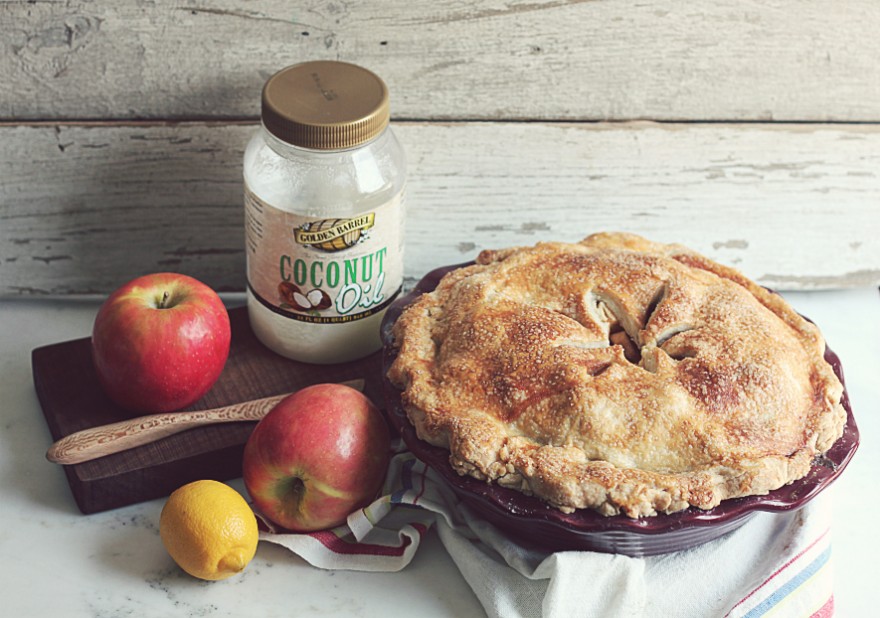 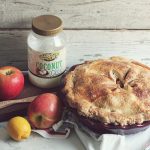 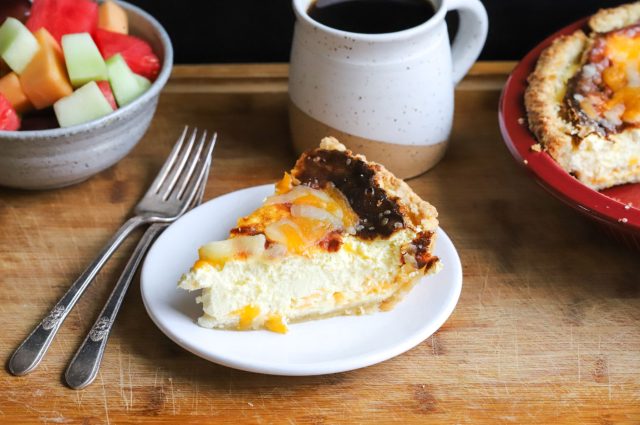 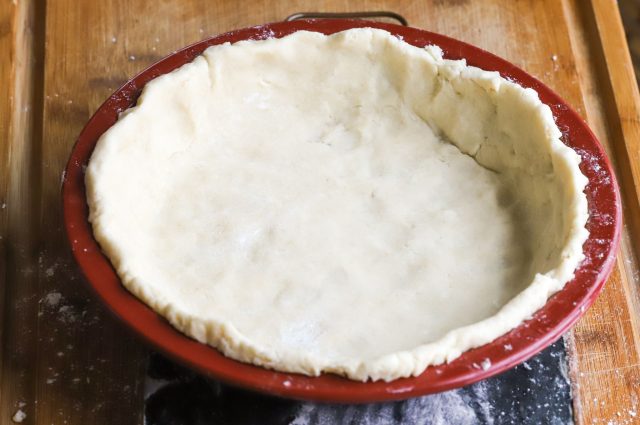 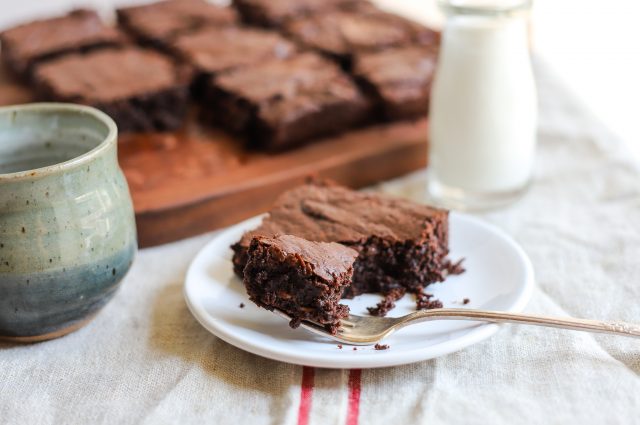