Probably the product that we receive the most questions about from our customers these days has got to be our Golden Barrel Coconut Oil. Common questions are “How is it processed?” “Is it refined or virgin?” or “Can you substitute it for other cooking oils?” Hopefully, through this post we can answer these questions as well as provide some other interesting information about this increasingly popular oil.

Only a few years ago, coconut oil was falsely considered to be very unhealthy due to its high saturated fat content. A supposed study was done claiming that use of coconut oil led to high cholesterol, heart disease, and obesity. This study was based on a loose test done on hydrogenated coconut oil and greatly pushed by other cooking oil organizations to move away from saturated fats and in turn use their products. Unfortunately, this economic push and public belief discredited and virtually eliminated coconut oil as a cooking oil in America. Only recently, have studies revealed that, trans fat created during hydrogenation is actually the main culprit causing heart disease and high cholesterol. Contrary to previous belief, not all saturated fats are unhealthy. In fact, most of the 90% saturated fat in coconut oil is medium-chain fatty acids which are found to be easily digested and quickly converted into energy. 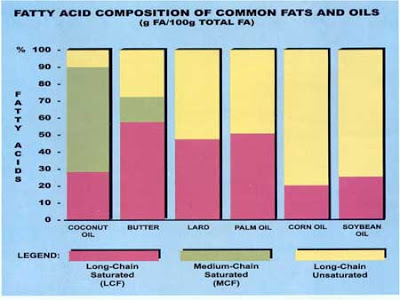 Almost 50% of the fatty acid content of coconut oil is lauric acid which is a great enhancer for the body’s immune system. In comparison, lauric acid is a main component of human breast milk which essentially protects children during infancy from illness. Another 7% of the fatty acids are capric acid which stimulates anti-viral activity in the body. Coconut fat is also believed to stimulate the metabolism and slow weight gain. An interesting article by Ray Peat can be found here which lists some examples of coconut oil being used by farmers in the 1940’s to try and fatten their animals. The result was the opposite effect as the animals became “lean, active and hungry.” For more information and a detailed look at the health benefits and anti-saturated fat agenda, please visit www.coconutoil.com.

Our coconut oil is considered refined (RBD) and not virgin. The most noticeable difference between the two is that refined coconut oil is bland to the taste and smell whereas virgin coconut oil has a distinct coconut taste and odor. The refined coconut oil is processed by pressing the dried coconut meat (copra). It is then purified with adsorbent clay, heat, and vacuums. After this, the oil is run through filters to remove any clay. It is then deodorized with a process of steam distillation, high heat, and vacuums. Next, it is filtered again before going into the final storage tank. After deodorization, a small amount of citric acid is added as a processing aid to the coconut oil for degumming purposes. Citric acid is considered worldwide to be a harmless food additive that is naturally found in citrus fruits. Finally, the oil is filtered two more times before being packaged. There are no solvents used or hydrogenation which produces trans fats.

(NOTE: Virgin and Extra Virgin Coconut Oil are the same thing. There is no industry standard definition for virgin coconut oil as there is for olive oil.)

A simple Google search on coconut oil will produce a lot of websites that tend to favor virgin coconut oil since it is less processed. Although virgin coconut oil has obviously undergone less treatment and therefore may have some extra polyphenols, refined coconut oil is still considered one of the most healthful and stable cooking oils that you can use.  In fact, many people prefer using refined over virgin for numerous reasons:

Here is an excellent video for easy-to-make homemade french fries using refined coconut oil by Matt Stone. (Note: The fries taste great even without the truffle oil that is used. It is totally not necessary and very expensive.)

Using refined or virgin is a matter of preference, but either way coconut oil is a great option for many purposes. In addition to its stable shelf life, it works great as a cooking/frying oil and can be equally substituted for any other cooking oil. Coconut oil can be used in baked goods as a substitute for other oils, butter or shortening. It also performs wonderfully as a moisturizer and is very beneficial in soap making. Numerous soap makers use our Golden Barrel Coconut Oil when making their own soaps including Heritage Soaps who said on our Facebook page, “This Coconut Oil is the best — I use it in all my soaps!” Check out their website, www.heritagesoapspa.com, for a wide variety of handmade soaps made on a local Lancaster County Farm.

So if you haven’t tried coconut oil yet, why not make the switch. Your health and taste buds will thank you for it.

Update: 09/19/14
Here is a very interesting video about some of the supposed health benefits of coconut oil:

Here is another post about using coconut oil to treat psoriasis and Here is one for making Homemade Coconut Oil Toothpaste.